England leads South Africa in the first innings thanks to hundreds from Nat Sciver and Alice Davidson-Richards. - 8x - English

England leads South Africa in the first innings thanks to hundreds from Nat Sciver and Alice Davidson-Richards.

On day two of the one-off Test at Taunton, Nat Sciver and debutant Alice Davidson-Richards each scored their first hundreds as England overcame a batting collapse to take the lead over South Africa after the first innings.

At 328-6 at the time of stumps, however, England had gained a 44-run advantage, and Sciver and Davidson-Richards’ sixth-wicket stand had reached 207 runs before the latter was dismissed to the final delivery of the day.

Vice-captain Sciver improved on her previous best Test total of 88, which she had achieved at Taunton against Australia three summers prior, and continued on to reach three figures from 182 deliveries as runs came quickly after tea.

After Enid Bakewell in 1968, Davidson-Richards became the second England Women player to hit a century in her first Test innings. She did so even more rapidly, from 173 balls.

In addition, the 28-year-old is only the second England Test rookie, male or female, to score a hundred and take a wicket, after WG Grace back in 1880. Jamie Overton nearly missed accomplishing this feat in last week’s men’s Test against New Zealand at Headingley when he was dismissed for 97.

As they bowled their spinners before the second new ball and England milked runs, while the tourists were wasteful with the fresh Dukes later in the evening, South Africa’s hold on the women’s Test slipped.

As England cruised past South Africa’s 284 all out, Sciver and Davidson-Richards scored 152 runs in 38 overs in the final session. The late departure of Davidson-Richards, caught at backward point off Tumi Sekhukhune, just somewhat diminished the victory’s lustre.

Knight, the captain of England, stumbled as Sciver called her through for a hazardous single, leaving her short of her ground at the keeper’s end. She was run out after the first ball of the afternoon session.

That dismissal put an end to a shaky innings by Knight, who was lost by South Africa skipper Sune Luus at slip before the break after being fooled by wicketkeeper Sinalo Jafta diving over her.

Then, in the span of two overs, Dunkley and Jones were dismissed. Dunkley slashed a full, swinging ball from seamer Anneke Bosch (3-59) behind as she added Beaumont and Lamb to her list of victims, and Jones was bowled on the sixth ball when spinner Nonkululeko Mlaba dragged a delivery on.

Before reaching 20, Sciver experienced a couple of scares. First, Jafta fumbled down the leg-side, allowing a stumping opportunity to pass her by, and then the batter cut just past Lizelle Lee at gully.

But after that, things were calm as the vice-captain of England made it two consecutive international hundreds, following her century against Australia in the 50-over World Cup final in April.

With only six white-ball international appearances for England prior to this year, Davidson-Richards lacked any nervousness during the Test whites.

The all-rounder, like fellow debutant Lamb earlier in the day during a much shorter innings of 38 runs, was particularly effective driving and cutting through the off-side.

Lamb hit a total of five fours before being bowled through the gate by Bosch on the drive, four overs after Beaumont was caught lbw by Bosch with an in-swinger. 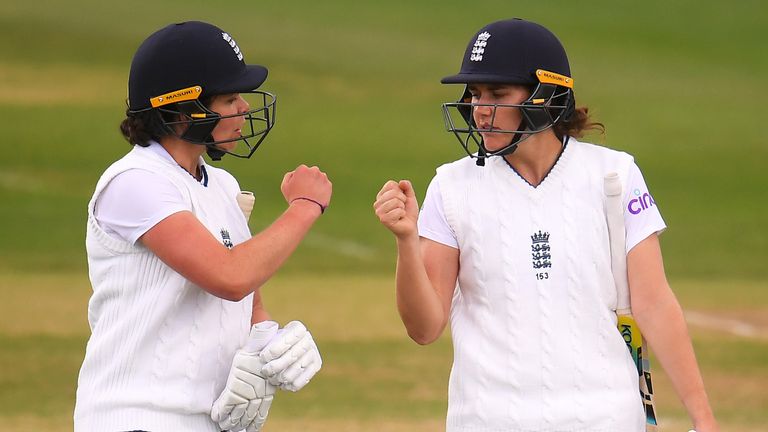 They referred to it as “Davidson-Richards’ dream debut.”

Talking in a recent interview, Alice Davidson-Richards said: “It was so absurd that I genuinely lack the words to describe it! I anticipated feeling more anxious than I actually did. Having someone I’ve known for, god knows how long, be so at ease was incredibly special and pleasant. That made my journey easier.”

The Hundred: Kane Richardson scores twice as the Birmingham Phoenix defeat the Oval Invincibles in a hard-fought match.